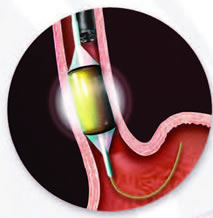 Radiofrequency ablation (RFA) therapy has been shown to be safe and effective for treating Barrett’s esophagus. Radiofrequency energy (radio waves) is delivered via a catheter to the esophagus to remove diseased tissue while minimizing injury to healthy esophagus tissue. This is called ablation, which means the removal or destruction of abnormal tissue.

While you are sedated, a device is inserted through the mouth into the esophagus and used to deliver a controlled level of energy and power to remove a thin layer of diseased tissue. Less than one second of energy removes tissue to a depth of about one millimeter. The ability to provide a controlled amount of heat to diseased tissue is one mechanism by which this therapy has a lower rate of complications than other forms of ablation therapy.

Radiofrequency ablation for Barrett’s esophagus has been used in more than 60,000 cases and the devices are cleared by the U.S. Food and Drug Administration. The balloon-based catheter has been available commercially since January 2005, the endoscope-mounted catheter since January 2007.

A clinical trial by Fleischer, et al. showed that 98.4% of people were free of Barrett’s at a follow-up exam 30 months after two or three RFA treatments. Studies show that when the Barrett’s tissue is removed, it is typically replaced by normal, healthy tissue within three to four weeks. Recent five year follow-up of longer term trials shows that the effects of radiofrequency ablation are durable.

DISCLAIMER: This information is intended only to provide general information and not as a definitive basis for diagnosis or treatment in any particular case. It is very important that you consult Dr. Simoni about your specific condition, contraindications, and possible complications. This treatment is contraindicated in patients who are pregnant, have had prior radiation therapy to the esophagus, esophageal varices at risk for bleeding, or prior Heller myotomy. Possible complications may include: mucosal laceration, perforation of the esophagus requiring surgery, infection, bleeding, and stricture formation requiring dilation. The overall complication rate reported for this procedure is approximately <0.02%.